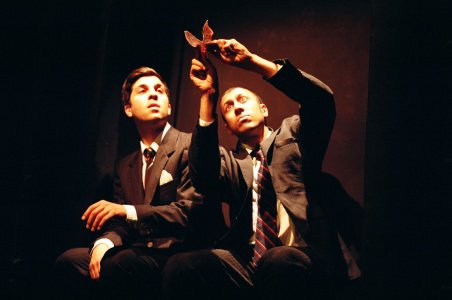 For the month of August Ravi Jain and myself played Spent at the Edinburgh International Fringe Festival. The show garnered rave reviews and we sold out our entire run!! We had a great, physically, mentally and spiritually exhausting time…

Many thanks to all of those who came to see the fundraiser in Toronto at the Young Centre before we left and those who either donated or sent well-wishes. We are so very lucky to have such a supportive community behind us!

…AND stay tuned for TOURING NEWS ABOUT SPENT!!! who knows where we might go next…India…? the middle east?? south of the border???

What the press said in Edinburgh:

**** FOUR STARS in The List “Sharp-as-a-tack satire…boundless energy and inventiveness.”

**** FOUR STARS in FESTMAG and one of their TOP FIVE Fringe shows of the Festival ” Funny, pacey and utterly mad, it shows just how well theatre can shed light on our bonkers world.”

**** FOUR STARS in the TELEGRAPH “A physically swift and comically ingenious deconstruction of what it has felt like to be tossed about by the economic tsunami.”

BROADWAY WORLD “The unbelievably fast transitions between accents and mannerisms, which were carried out with apparent ease, is just one element among many which demonstrate that this is a well-polished piece which deserves the awards and acclaim is it receiving.”

THE INDEPENDENT: “Ravi Jain and Adam Paolozza, the Vladimir and Estragon of Bay Street (Toronto’s Wall Street) lead us through the existential lows and highs of financial life…an extraordinary hour of physical theatre”

Tom Lamont from the Observer called it, ” A frenzied 2-man riff on the global economic collapse with bonus takedowns of broadcast journalism and organized religion, a lotta fun”